The price of Asus Zenpad C 7.0 Z170MG is Upcoming In Bangladesh.
Brand:
Asus 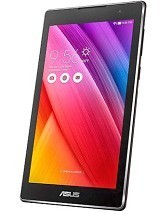